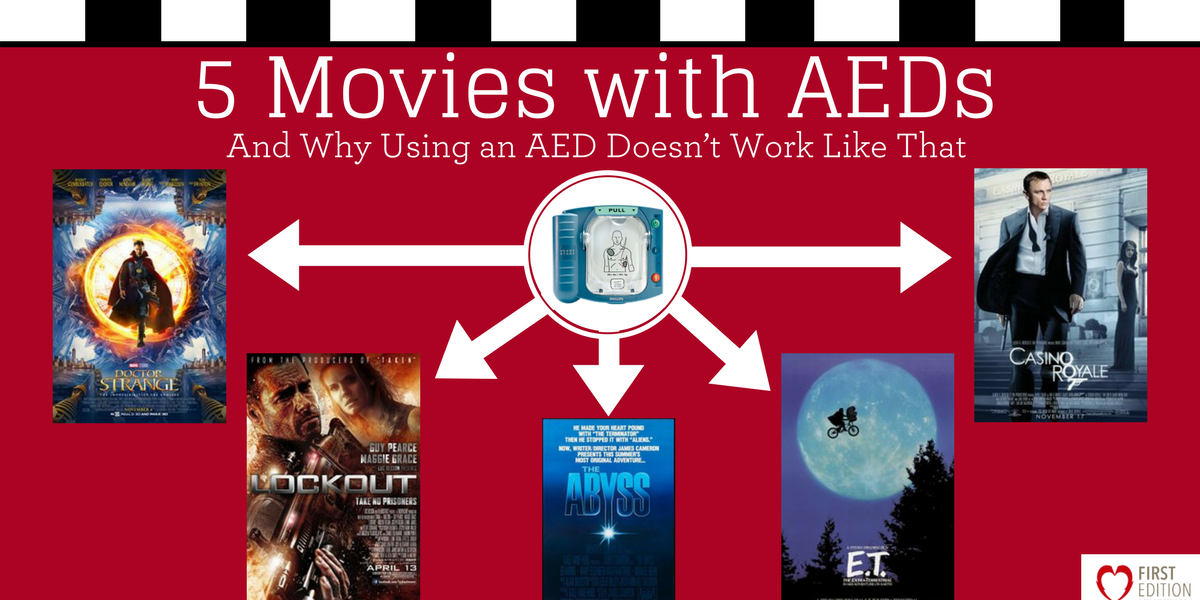 Everyone knows that what we see in Hollywood isn’t always the truth. In most cases, movie directors and producers will thoroughly study an area before filming it. But, there are still times when the movies don’t have it quite right. In particular, there are a number of films that depict using an AED, and it isn’t completely accurate. Here are 5 movies with AEDs, and why using an AED doesn’t work like that.

After James Bond has shared drinks with some unfriendly men, it becomes apparent that he has been poisoned. He rushes back to his car, informing his team that he is about to go into cardiac arrest. His team then instructs him to pull out the AED from his car and apply the pads to his chest – as using an AED is the only way to save him. But because the AED only has one charge, they need to time it perfectly. Then as Bond slowly fades, he tries pressing the button but no shock is administered. He realizes that the wire has fallen out of the AED pad – but it is too late and he crashes. Thankfully, a woman comes to the rescue, reattaches the wire to the AED pad, and administers the shock. Bond jumps to a start and regains consciousness.

In this scene, E.T. has been recently found in the forest, dying, and is brought to the home of Elliot. Scientists have invaded the home cutting of E.T.’s link with Elliot. Now that the link has been severed, Elliot begins to recover while E.T. continues steadily towards death. Tons of scientists and doctors crowd around E.T., working to revive him and save his life. Eventually one doctor suggests the use of the defibrillator. The doctors pull out a medical AED and administer a loud shock to E.T. They continue to perform CPR but it is to no avail. The doctors call it, announcing the time of death, leaving a heartbroken Elliot. Spoilers: E.T. is not dead!

Something bad has happened to Stephen Strange and he has been wounded by an un-worldly weapon. He has transported himself to the hospital where he becomes unconscious. It is only through his ‘astral projection’ (out-of-body experiences) that he is able to speak with Dr. Palmer to help her properly fix him. Unfortunately, there are villains out to get Stephen and they come to the hospital and battle him in the astral realm. When Stephen’s heart stops, Dr. Palmer brings out an AED and administers a shock. She gets his heart beating once more, but Stephen comes through the astral realm and tells Dr. Palmer to “hit him again.” Using an AED shock, he is able to defeat his foe in the astral realm. Then Stephen returns to his body and awakes.

Bud and Lindsey are trapped underneath their boat and the water is slowly rising. There is only one scuba-diving suit and two of them. Lindsey then comes up with the idea of allowing herself to drown in the freezing water, while Bud wears the suit and brings her back to the station. There, she identifies, they can resuscitate her back to life. Bud agrees after much protest, and soon enough Lindsey has drowned and Bud swims her back to the station. He notifies the team ahead through radio that they will need to resuscitate Lindsey, so they bring out the AED. A few shocks are administered to no avail, and one of the team members announces that she has flat-lined. Bud refuses to quit and begins to perform CPR, giving a breath after every 5 compressions. After they announce there is no pulse, Bud then begins to violently compress Lindsey, yelling at her to fight. Suddenly, Lindsey coughs and comes back to life.

Snow enters the scene and finds a young woman on the ground unconscious with a hole in her leg. Through an earpiece, an agent guides him through how to assist the woman. He instructs Snow to open the ‘medi-pack’ and get the ‘defib-kit.’ With only 15 seconds, he has to gel the two small pads, place them on her chest and make sure they stick. Then, using the AED, he administers a shock using a small box. The agent tells Snow that he was able to get a pulse but he now needs to give an injection of serotonin and norepinephrine. The problem is that he needs to inject it through the center of her right eye into her brain. After doing this with much hesitation, and another shock to the heart, the young woman begins to seize. Once she stops seizing, the agent rushes Snow, telling him to give her mouth to mouth. He gives the woman two breaths before she wakes up, pushing Snow off of her in disgust.

With all of these errors in movies it would seem that using an AED is difficult. But it isn’t! These films use strange, and often unrealistic AEDs that would not actually work. Using an AED is easy, and with the help of images, labeled buttons, and voice activated instructions, anyone can assist a person experiencing a cardiac arrest.

Categories: Aed, BlogLeave a comment
Tags: AEDaed 101AEDs in moviesHollywoodMovies with AEDsUsing an AEDwhy you need an aed

Healthy BBQ Recipes That Are Perfect For Summer
June 13, 2022

Not So Fast: A Heart-Smart Approach To Marathons
June 6, 2022

Always Sleepy? What Chronic Fatigue Can Say About Your Heart
May 23, 2022

Heart Healthy Camping Recipes To Try This Year
May 19, 2022