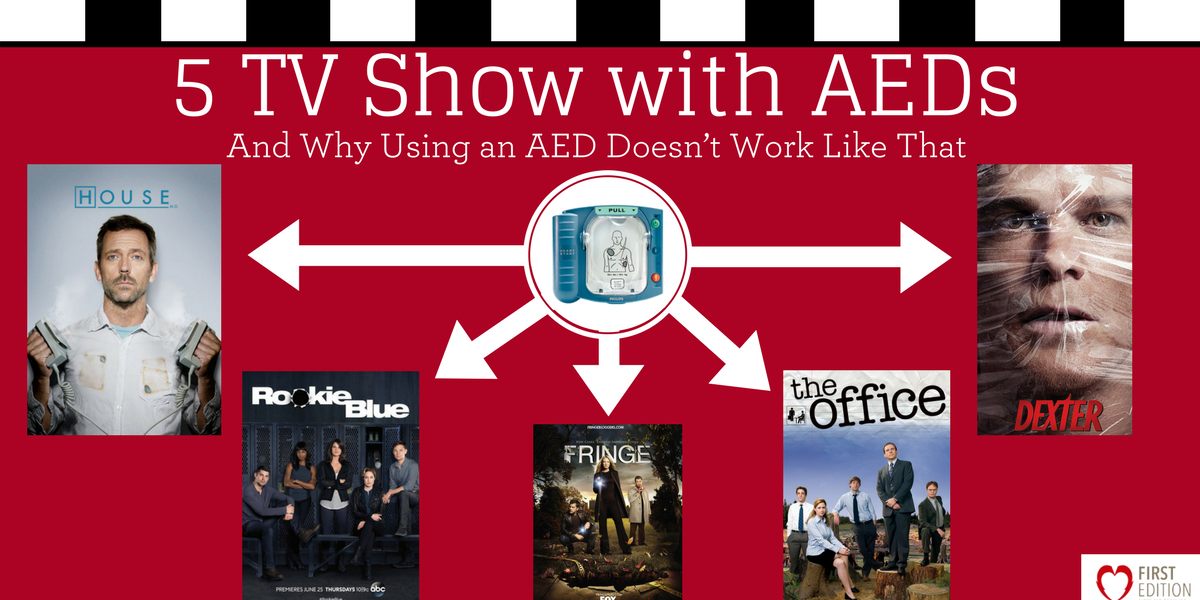 How many times have you sat down to binge a Netflix show and seen a beloved character using an AED to save someone’s life? AEDs are wonderful life-saving devices that, if used properly, have the potential to save someone suffering from a cardiac arrest. But when watching TV shows with AEDs, Hollywood doesn’t always get it right. Take a look at these 5 TV shows with AEDs and why using an AED doesn’t quite work like that!

One of Dr. House’s patients is crashing, and Dr. Cameron is doing everything she can to help. Suddenly, the patient (who is being treated at home because he is agoraphobic – much to House’s displeasure) begins to have a ‘heart attack.’ House instructs Cameron to perform CPR while he makes a call. She instead refuses to give CPR and insists on getting the paddles and using an AED. House then makes a quick phone call and informs the patient’s lawyer that the patient is having a ‘heart attack.’ House begins compressions as the patient’s heart monitor starts flat-lining. Cameron begins to yell at House telling him that the patient is dying and they need to get the paddles on right away. She finally jumps in, tells House to stay clear and then delivers a shock to the patient. The single shock has now brought the patient’s pulse back and he is once more stable.

In Dunder Mifflin, Scranton, there is always someone who is up to no good. This time it is Kevin, one of the office accountants. When Meredith goes to stand up and file some paperwork, Kevin quickly makes his move and places AED pads upon Meredith’s chair. Then he runs away to watch what will happen. Meredith then sits down, and much to Kevin’s surprise, she seems to do nothing. Then, her hair starts to stand on end as she continues her work, leaving Kevin giggling in delight.

Dexter is a blood spatter expert who feels that his serial killings are justified because he only kills guilty individuals. In this scene Dexter is after two more victims: local emergency medical service workers, who are called to a scene for a ‘possible stabbing.’ What they don’t realize is that it is a set up, and Dexter quickly takes out the two guards. He brings them back to the ambulance, ties them up, and tells them why they are his next victims – because they were only saving some people and then letting others die to harvest their organs. So, Dexter feels it is only right that they see justice. After taking a blood spatter sample from each individual, he uses the ambulance charging defibrillator paddles and places one paddle on each guard. The guards receive a constant stream of shocks and seize until they die.

As a chase continues, Peter finds himself with a young woman who is going into cardiac arrest. He calls a friend and explains his situation. While he is on the phone, the woman’s heart stops and flat-lines. Peter panics and begins grabbing things around the garage setting that he is in, explaining to his friend on the phone that he does not have a defibrillator. With his friend’s medical ‘expertise,’ Peter begins to create his own AED using an old battery and some large pieces of scrap metal. Sure enough, after he is told to “crank it,” using the AED, he shocks the woman’s heart into beating once more.

Chloe is in the hospital and is speaking with a friend when suddenly she stops talking and her heart goes into cardiac arrest. The doctors and nurses are called in immediately and they begin doing CPR on Chloe until the crash cart is brought in. The doctors keep a steady eye on her pulse and give Chloe a shock, wait, and then administer another shock. Then Chloe flat-lines and the nurse announces that she is in asystole (flat-lined). The doctor than instructs the nurses to continue CPR compressions and breaths. They do this for a while and then take a moment to check her heart rhythm and then find that she has a ‘shockable rhythm’ and give yet another shock. Chloe’s heart then returns to regular rhythm and becomes stable once more.

Next time you sit down to watch a show and see characters using an AED, remember that it may be being used in correctly! AEDs should be used in emergency situations (not pranks or murders), and are easily used thanks to the advancements in technology where the machine can tell us what to do. Having an AED nearby could be just the thing to save a life! Want to know more about how an AED works and get one for your location? First Edition First Aid has all the resources for you to learn more about AEDs and purchasing an AED yourself!

Categories: Aed, BlogLeave a comment
Tags: AEDAED usageAEDs in TV ShowsdefibrillatorTV Shows with AEDsUse an AEDUsing an AEDWhy Using an AED Doesn't Work Like That

Your Guide to Everything World Heart Day
September 26, 2022

Should You Wear Sunscreen Everyday, Even if Your Lotion Has SPF?
August 1, 2022