Allergic Reactions – Behind the Scenes of What is REALLY Happening (and How to Help!) 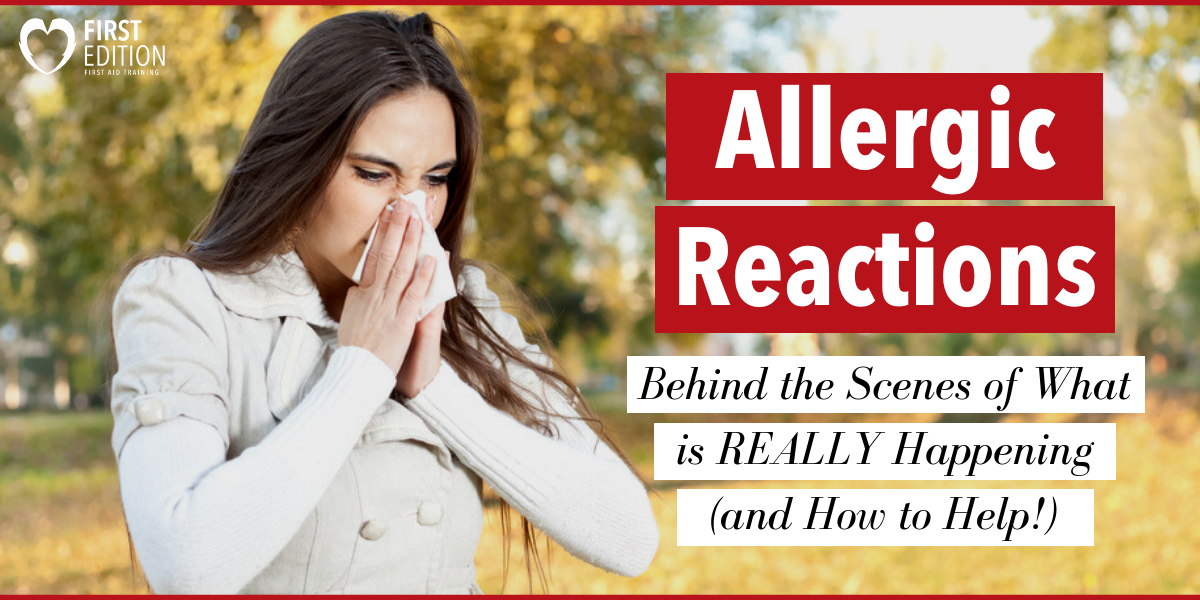 Allergic Reactions – Behind the Scenes of What is REALLY Happening (and How to Help!)

A bee stings, you eat something with a hidden ingredient, or you come across a plant that sends your body into itchy hives. Allergic reactions are one of those common problems that are not only frustrating for the individual to avoid, but can be instantly dangerous too! We know that when an allergic reaction happens we need to act fast to treat it, but do we know what is really happening behind the scenes? 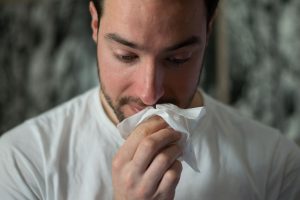 What Are Allergic Reactions?

When the body comes into contact (through ingestion, inhalation, or touch) with an allergen (which can be any number of things!), the body overreacts. This overreaction is seen through the sending out of antibodies which are made to fight the ‘threat’ coming against the body. Although the allergen is something that, in reality, is harmless (milk, flower pollen, etc.), the body believes it is harmful. When the body believes this, it cues up the immune system, releasing antibodies such as immunoglobulin E (IgE). The IgE then travels to different cells in your body and releases chemicals (such as histamines) that work to deter the attack and protect the body. Releasing these antibodies and chemicals in turn actually lead to the creation of symptoms commonly seen with an allergic reaction. These symptoms include:

Depending upon the severity of the allergic reaction, the reactions can vary from ‘slightly irritating’ (as seen in the symptoms above) to extremely dangerous and life threatening. In instances of an extreme reaction, symptoms present can include:

If not attended to, these symptoms could lead to further problems such as cardiac arrest, brain damage, or other physical complications.

What Causes an Allergic Reaction?

The answer: pretty much anything! Every person on this planet is different and will react differently to various things. The most common types of allergic reactions are caused by allergens such as: 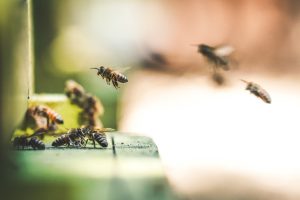 What To Do When Someone Has An Allergic Reaction

Most people will be aware of the allergies they have and can actively avoid them. But in the case of an unexpected allergic reaction (especially with children or those with disabilities) always look for an allergy medical ID bracelet or call for help. For example, if a child is stung by a bee at the playground with no parents around, monitor them closely and call 911 when in doubt of their symptoms. It is better to be safe and overcautious than to have someone suffer anaphylactic shock or cardiac arrest.

This being said, there are a number of ways to directly treat an allergic reaction depending on how severe the reaction is.

For most allergies, it is simply more of an irritant and can be quickly treated with Benadryl. Benadryl contains diphenhydramine which is an antihistamine that helps overcome allergy symptoms that are not serious or severe (such as runny nose, sneezing, watery eyes, etc.). 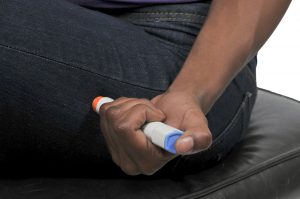 In reactions that are more life-threatening (in which you should always call 911 right away), individuals will likely carry an Epi-Pen with them. An Epi-Pen (or epinephrine autoinjector) is a medical device that is used in times of serious allergic reactions and anaphylaxis. The autoinjector pen is inserted directly into the thigh of a patient, in which the pen will automatically inject a dose of epinephrine, causing the lowered blood pressure to rise. If an epi-pen is not injected quickly, there are serious consequences to anaphylaxis that include cardiac arrest, and a risk of death.

NOTE: If you are ever with someone who has a severe allergic reaction, use their epi-pen to inject the dose for them, and remember ‘Blue to the sky, orange to the thigh.’

If an anaphylaxis is not overcome with the injection of epinephrine, you may need to use your first aid and CPR training. The patient’s blood pressure is seriously low, and if their heart stops beating regularly, you will need to perform CPR or use an AED to revive them. Once 911 has been called, ask someone nearby to retrieve an AED for you while you begin CPR. Doing this immediately could be just the thing to save their life until emergency medical professionals arrive!

The next time you come across someone having an allergic reaction (or you are having one yourself!) treat it appropriately and quickly. Simply knowing what is going on and how to help could be just the thing to save a life!